skip to main | skip to sidebar

Rent a bike from Greenway Bicycles and explore Central Florida's most beautiful scenery!

We are located on the Florida Greenway Trail System, offering 60+ miles of fun for the whole family!

We also have a full-service repair department, offering service while you wait!

Save the dates and join us for one of these great races, sponsored by Gone Riding.

For more info, please visit www.goneriding.com
And of course, please save the date for the 4th annual Santos Fat Tire Festival, March 19-21!
Posted by Biker Babe at 8:48 AM No comments:

T-shirts and bumper stickers are on their way!

Posted by Biker Babe at 1:43 PM No comments:

Wendy Chioji has a cool gig for the Tour de France this summer, and wants you to know about it so you can come along! She's a cycling tour guide for Discover France Adventures/Cycling Classics, one of only four cycling touring companies worldwide to be designated as an official, licensed partner of the Tour de France. That means special access to riders, teams, team buses, race routes, and much, much more for the VIP level TdF trips. Discover France Adventures also offers other levels of guided and self-guided trips, beginning in beautiful Annecy and ending with grand stand seats to watch the finish on the Champs Elysees.

New signs are up!

We put up our new signs on Sunday, now we just need to get in the inventory and we will be open! Please stop by to check out our new shop, we will be in there working this weekend and plan to be open by January 22! 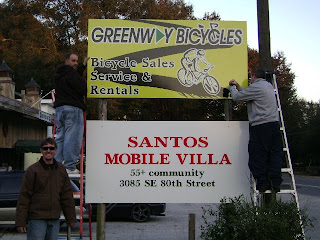 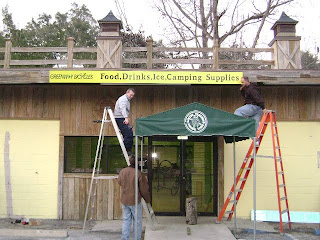 Posted by Biker Babe at 7:33 AM No comments:

Where: Meet at the OMBA Shed @ Campground

Why: In preparation for the FTF in March, we will be adding clay to the pump track to re-shape the rollers and the berms! Gotta make it flow again, like new!

Who: You, me and everyone you know who enjoys the Santos Trails! Get your friends involved!!!

Volunteers will be provided with snacks, drinks and lunch. Greenway Bicycles will have some free swag for the volunteers, so show up, do your part to maintain our awesome trail system, and walk away with a sense of accomplishment and free stuff!
Posted by Biker Babe at 11:58 AM No comments:

Is saving money one of your new year's resolutions?

Let Greenway Bicycles help you put more money in your wallet each month!

Remember that Renewable Energy Tax legislation that passed a few months ago? Hidden deep within the legalese jargon is a nifty little tax credit for commuters who bike to work.

What the Bicycle Commuter Act Offers
The credits breakdown like this:
For employees who regularly commute to work by bicycle, employers may offset the costs of bicycle purchase, improvement, repair, and storage at the rate of $20 per month. Based on how the employer chooses to offer the benefits, the employee may bring receipts to be reimbursed, may sign up for regular monthly payments, or devise some sort of voucher system with their employer.

Bike commuters are not allowed to receive transit or parking benefits in addition to the bike benefit.

What Do You Have Do as A Commuter?
Obviously, you have to ride a bike to work. You don’t have to ride it everyday, but you do have to commute by bike at least three times a week.

If you already bike to work, it's like a free twenty bucks. (I smell a pizza party.) Otherwise, it's just one more good reason to do so.

Get your company on board with the Bicycle Commuter Act, and Greenway Bicycles will offer discounts on tune-ups and accessories to everyone you work with!
Posted by Biker Babe at 7:08 AM No comments:

Located at the entrance of the Santos Trailhead!

Wear a helmet!
(All bicycle rentals include a helmet)

From Ocala:
Take 441 South to SE 80th Street. Turn right on SE 80th, we are one block down on the right hand side.

From Tampa:
Take 75 north. Take Exit 341, and follow same directions as above.

Check out our Orlando shop!